For this Curio I thought I'd show some of the work that came about during the process of illustrating the Word Hoard vault.

After reading Phil's Galdr Song, I began researching Viking burial vaults.  For the first couple of sketches I adhered to a literal representation, maintaining a distance from the more fantastic representations (D&D, Elder Scrolls, LOTR) of vaults and caves.

But this ultimately failed to do justice to the scale of the poetry.  I suppose historically, the gravity of emotion mythicisized  human experience.  The empiricist of the Enlightenment would shine a light into a dark recess and measure the dimensions whereas the primitive man (oxymoron?) would cast his gods and devils and keep a safe distance.  When our ancestors walked into a forest in the blackest night, the darkness concealed dragons and beasties that only the quickening pulse and peripheral vision could sense.  And since the concrete is deprived of the abstract it can be studied and rendered.  Therefore, everything that can't be seen must be grander than that which can.  Our Viking man builds a tomb out of stone and earth but the spirit of the interred turns it into the gate to Valhalla.  So, with this idea planted in my head came the acceptance of a larger scale.


The throne caught my imagination.  In particular, the word "knotted."  While doodling ideas I proposed an idea to myself, "What if the throne is actually a tree."  So, I wondered, "What kind of tree?"  So, while searching historic trees I found the Pulpit Yew :

...and so I had a precedent.  Then, I decided to use the layering beech as the actual tree because...they're pretty cool looking.  The particular tree, if you're interested in that kind of thing is the beech at Kilravock Castle. 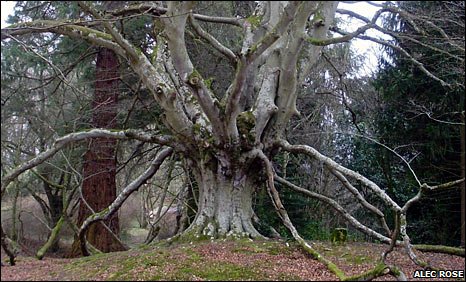 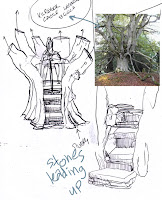 From there it was a matter of sketching and painting and thinking and talking with Phil and re-sketching and re-thinking...

...until voilà!  We found something we liked. 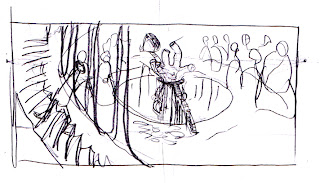 Oddly enough, this little sketch came about from a bit of paper taped to my drawing board and desk (my desk doesn't really have a Photoshop-ped cavern in it): 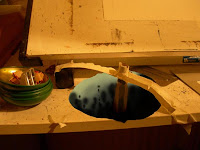 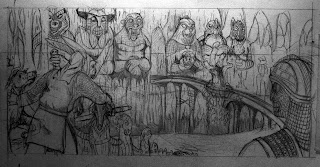 What I like best about working with Phil is the completeness of the world described in the Annals.  It makes setting a scene that much easier because there are so many references that can be drawn from.  All of the statues and carvings in the Galdr Song painting are based on just a handful of characters from the poems.  The same goes for the hoard in the initial sketches: all of the items are to be found in the Annals.  So with that said, as more poems are posted and more of the world is revealed, you should be able to look back and spot a thing here or a person there either somewhere in the background, or in a border, or in the shadows with the dragons and the beasties...

All images copyright their respective owners.


Sad news.  Where the Wild Things Are's Maurice Sendak passed away.  He was 83.

If you aren't familiar with Mr. Sendak's oeuvre, I highly recommend a little Googling and Wikipediaing.
I've always been fond of his illustrations for Else Holmelund Minarik's Little Bear series: 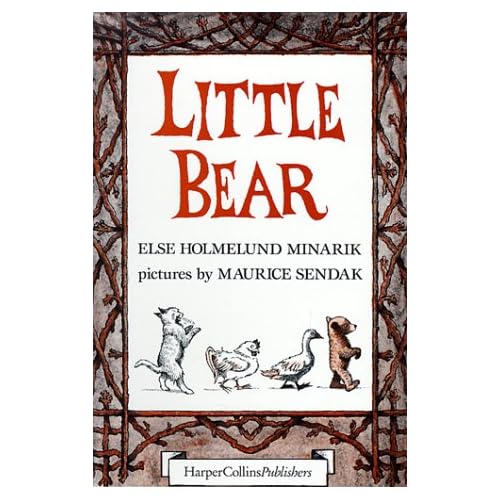 Thanks Little Nell. Just Googled the Avebury tree. Amazing knots. Ain't nature lovely? One of my favorite places to walk is in the Forest of Bere, part of the Havant Thicket. The cathedral of pines is stunning. For people who like trees, there are a lot of trees there to like.

Sounds idyllic. I find Pine forests very uplifting, I can see why pine scent is used in aromatherapy as a 'livener'. Yeah nature's cool alright. I particularly love this point in the year, when the trees (almost in a split second) are in full leaf, brand new and stunningly green. I just wish there was a way to hug them all :)

Scrub the last line. I kind of mean it, but I was going for hippy and got cheesy instead. I guess you could say I was being treesy. Stop. Me. Now. :) xx

Hyuk! Hyuk! You are a one x