A full text version can be found at the bottom of the illustrated pages. 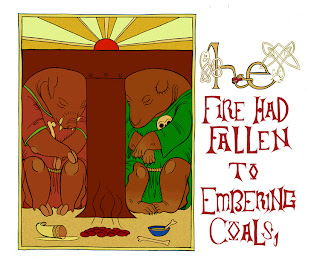 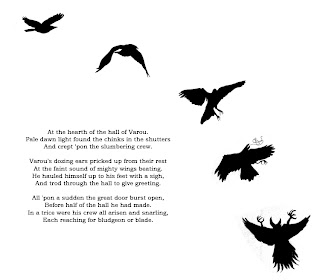 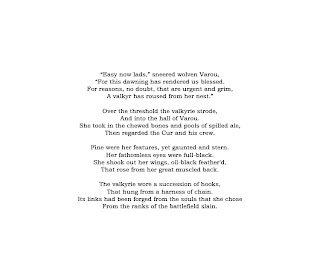 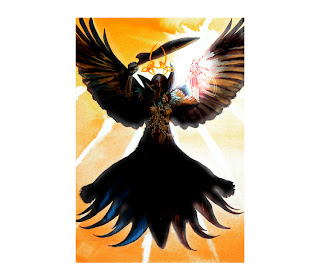 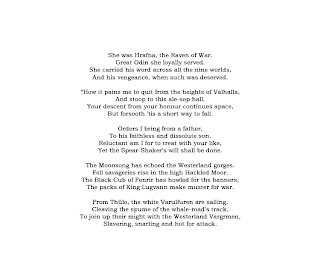 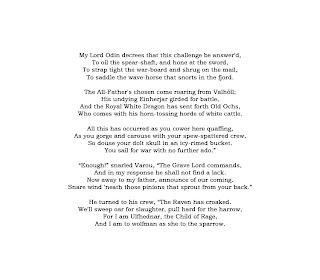 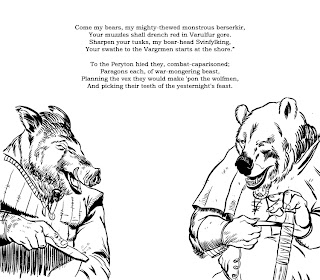 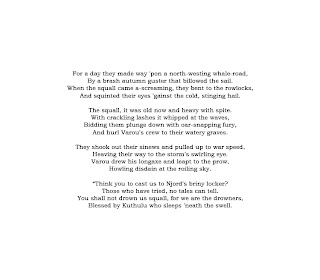 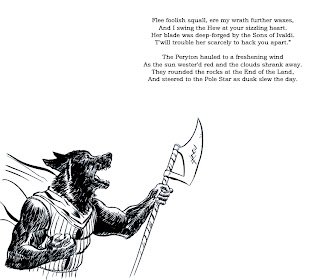 The fire had fallen to embering coals
At the hearth of the hall of Varou.
Pale dawn light found the chinks in the shutters
And crept 'pon the slumbering crew.

Varou's dozing ears pricked up from their rest
At the faint sound of mighty wings beating.
He hauled himself up to his feet with a sigh,
And trod through the hall to give greeting.

All 'pon a sudden the great door burst open,
Before half of the hall he had made.
In a trice were his crew all arisen and snarling,
Each reaching for bludgeon or blade.

“Easy now lads,” sneered wolven Varou,
“For this dawning has rendered us blessed.
For reasons, no doubt, that are urgent and grim,
A valkyr has roused from her nest.”

Over the threshold the valkyrie strode,
And into the hall of Varou.
She took in the chewed bones and pools of spilled ale,
Then regarded the Cur and his crew.

Fine were her features, yet gaunted and stern.
Her fathomless eyes were full-black.
She shook out her wings, oil-black feather'd,
That rose from her great muscled back.

The valkyrie wore a succession of hooks,
That hung from a harness of chain.
Its links had been forged from the souls that she chose
From the ranks of the battlefield slain.

She was Hrafna, the Raven of War.
Great Odin she loyally served.
She carried his word across all the nine worlds,
And his vengeance, when such was deserved.

“How it pains me to quit from the heights of Valhalla,
And stoop to this ale-sop hall.
Your descent from your honour continues apace,
But forsooth 'tis a short way to fall.

Orders I bring from a father,
To his faithless and dissolute son.
Reluctant am I for to treat with your like,
Yet the Spear-Shaker's will shall be done.

The Moonsong has echoed the Westerland gorges.
Fell savageries rise in the high Hackled Moor.
The Black Cub of Fenrir has howled for the banners;
The packs of King Lugvann make muster for war.

From Thüle, the white Varulfuren are sailing,
Cleaving the spume of the whale-road's track,
To join up their might with the Westerland Vargrmen,
Slavering, snarling and hot for attack.

My Lord Odin decrees that this challenge be answer'd,
To oil the spear-shaft, and hone at the sword,
To strap tight the war-board and shrug on the mail,
To saddle the wave-horse that snorts in the fjord.

The All-Father's chosen come roaring from Valhöll;
His undying Einherjar girded for battle,
And the Royal White Dragon has sent forth Old Ochs,
Who comes with his horn-tossing horde of white cattle.

All this has occurred as you cower here quaffing,
As you gorge and carouse with your spew-spattered crew,
So douse your dolt skull in an icy-rimed bucket.
You sail for war with no further ado.”

“Enough!” snarled Varou, “The Grave Lord commands,
And in my response he shall not find a lack.
Now away to my father, announce of our coming.
Snare wind 'neath those pinions that sprout from your back.”

He turned to his crew, “The Raven has croaked.
We'll sweep oar for slaughter, pull hard for the harrow,
For I am Ulfhednar, the Child of Rage,
And I am to wolfman as she to the sparrow.

Come my bears, my mighty-thewed monstrous berserkir,
Your muzzles shall drench red in Varulfur gore.
Sharpen your tusks, my boar-head Svinfylking,
Your swathe to the Vargrmen starts at the shore.”

To the Peryton hied they, combat-caparisoned;
Paragons each, of war-mongering beast,
Planning the vex they would make 'pon the wolfmen,
And picking their teeth of the yesternight's feast.

For a day they made way 'pon a north-westing whale-road,
By a brash autumn guster that billowed the sail.
When the squall came a-screaming, they bent to the rowlocks,
And squinted their eyes 'gainst the cold, stinging hail.

The squall, it was old now and heavy with spite.
With crackling lashes it whipped at the waves,
Bidding them plunge down with oar-snapping fury,
And hurl Varou's crew to their watery graves.

They shook out their sinews and pulled up to war speed,
Heaving their way to the storm's swirling eye.
Varou drew his longaxe and leapt to the prow,
Howling disdain at the roiling sky.

“Think you to cast us to Njord's briny locker?
Those who have tried, no tales can tell.
You shall not drown us squall, for we are the drowners,
Blessed by Kuthulu who sleeps 'neath the swell.

Flee foolish squall, ere my wrath further waxes,
And I swing the Hew at your sizzling heart.
Her blade was deep-forged by the Sons of Ivaldi.
T'will trouble her scarcely to hack you apart.”

The Peryton hauled to a freshening wind
As the sun wester'd red and the clouds shrank away.
They rounded the rocks at the End of the Land,
And steered to the Pole Star as dusk slew the day.

Posted by Russell Mark Olson at 17:57