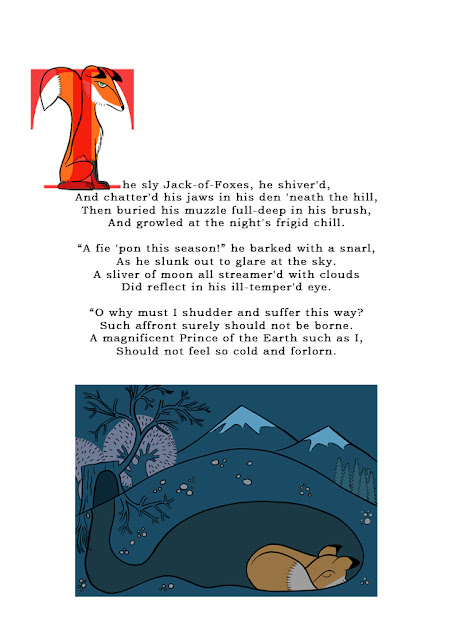 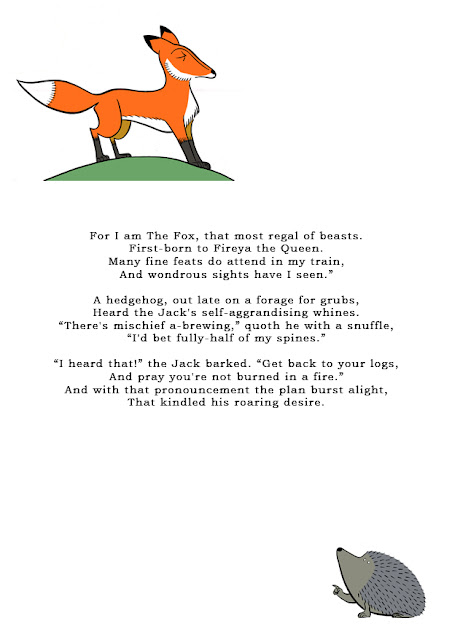 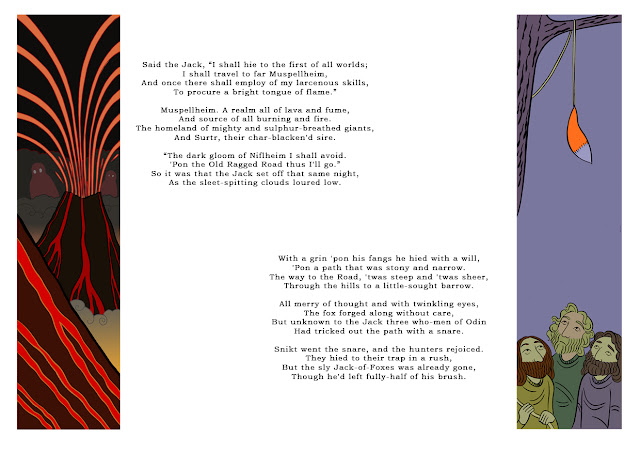 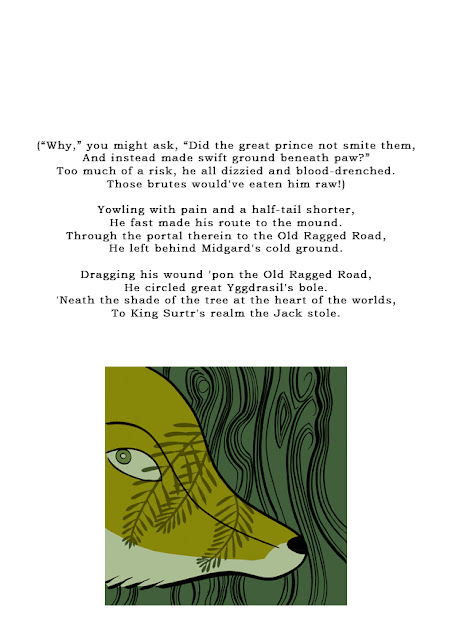 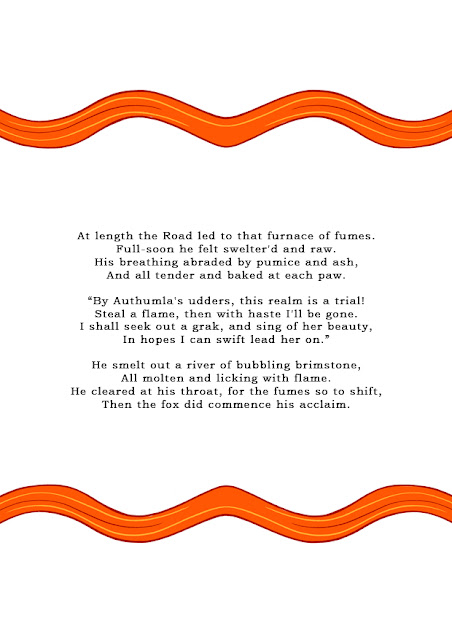 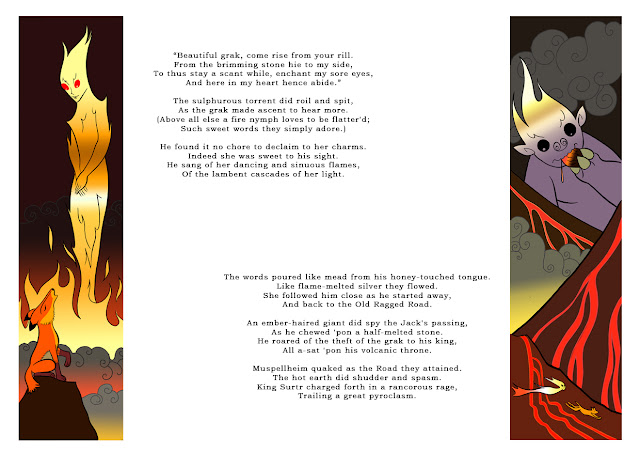 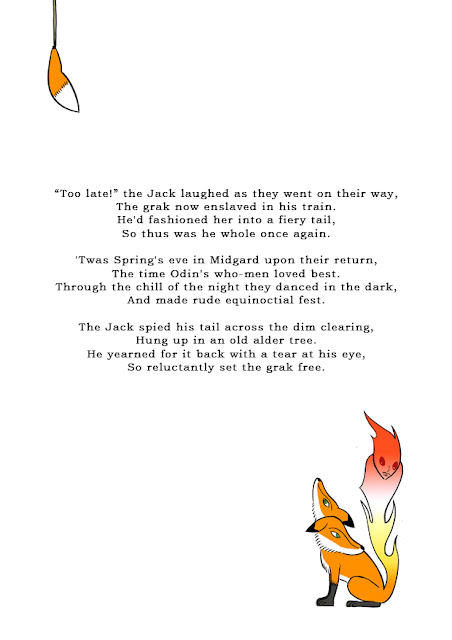 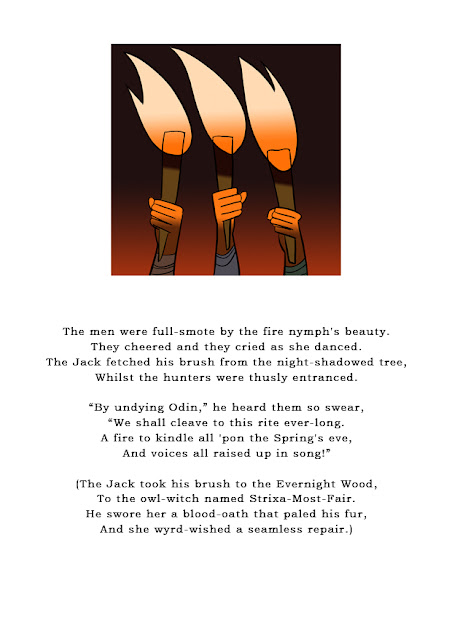 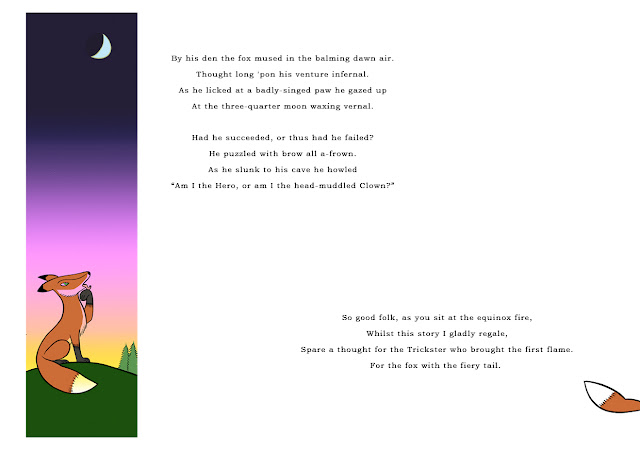 Here's the poem in plain text:

The sly Jack-of-Foxes, he shiver'd,
And chatter'd his jaws in his den 'neath the hill,
Then buried his muzzle full-deep in his brush,
And growled at the night's frigid chill.

“A fie 'pon this season!” he barked with a snarl,
As he slunk out to glare at the sky.
A sliver of moon all streamer'd with clouds
Did reflect in his ill-temper'd eye.

“O why must I shudder and suffer this way?
Such affront surely should not be borne.
A magnificent Prince of the Earth such as I,
Should not feel so cold and forlorn.

For I am The Fox, that most regal of beasts.
First-born to Fireya the Queen.
Many fine feats do attend in my train,
And wondrous sights have I seen.”

A hedgehog, out late on a forage for grubs,
Heard the Jack's self-aggrandising whines.
“There's mischief a-brewing,” quoth he with a snuffle,
“I'd bet fully-half of my spines.”

“I heard that!” the Jack barked. “Get back to your logs,
And pray you're not burned in a fire.”
And with that pronouncement the plan burst alight,
That kindled his roaring desire.

Said the Jack, “I shall hie to the first of all worlds;
I shall travel to far Muspellheim,
And once there shall employ of my larcenous skills,
To procure a bright tongue of flame.”

Muspellheim. A realm all of lava and fume,
And source of all burning and fire.
The homeland of mighty and sulphur-breathed giants,
And Surtr, their char-blacken'd sire.

“The dark gloom of Niflheim I shall avoid.
'Pon the Old Ragged Road thus I'll go.”
So it was that the Jack set off that same night,
As the sleet-spitting clouds loured low.

With a grin 'pon his fangs he hied with a will,
'Pon a path that was stony and narrow.
The way to the Road, 'twas steep and 'twas sheer,
Through the hills to a little-sought barrow.

All merry of thought and with twinkling eyes,
The fox forged along without care,
But unknown to the Jack three who-men of Odin
Had tricked out the path with a snare.

Snikt went the snare, and the hunters rejoiced.
They hied to their trap in a rush,
But the sly Jack-of-Foxes was already gone,
Though he'd left fully-half of his brush.

(“Why,” you might ask, “Did the great prince not smite them,
And instead made swift ground beneath paw?”
Too much of a risk, he all dizzied and blood-drenched.
Those brutes would've eaten him raw!)

Yowling with pain and a half-tail shorter,
He fast made his route to the mound.
Through the portal therein to the Old Ragged Road,
He left behind Midgard's cold ground.

Dragging his wound 'pon the Old Ragged Road,
He circled great Yggdrasil's bole.
'Neath the shade of the tree at the heart of the worlds,
To King Surtr's realm the Jack stole.

At length the Road led to that furnace of fumes.
Full-soon he felt swelter'd and raw.
His breathing abraded by pumice and ash,
And all tender and baked at each paw.

“By Authumla's udders, this realm is a trial!
Steal a flame, then with haste I'll be gone.
I shall seek out a grak, and sing of her beauty,
In hopes I can swift lead her on.”

He smelt out a river of bubbling brimstone,
All molten and licking with flame.
He cleared at his throat, for the fumes so to shift,
Then the fox did commence his acclaim.

“Beautiful grak, come rise from your rill.
From the brimming stone hie to my side,
To thus stay a scant while, enchant my sore eyes,
And here in my heart hence abide.”

The sulphurous torrent did roil and spit,
As the grak made ascent to hear more.
(Above all else a fire nymph loves to be flatter'd;
Such sweet words they simply adore.)

He found it no chore to declaim to her charms.
Indeed she was sweet to his sight.
He sang of her dancing and sinuous flames,
Of the lambent cascades of her light.

The words poured like mead from his honey-touched tongue.
Like flame-melted silver they flowed.
She followed him close as he started away,
And back to the Old Ragged Road.

An ember-haired giant did spy the Jack's passing,
As he chewed 'pon a half-melted stone.
He roared of the theft of the grak to his king,
All a-sat 'pon his volcanic throne.

Muspellheim quaked as the Road they attained.
The hot earth did shudder and spasm.
King Surtr charged forth in a rancorous rage,
Trailing a great pyroclasm.

“Too late!” the Jack laughed as they went on their way,
The grak now enslaved in his train.
He'd fashioned her into a fiery tail,
So thus was he whole once again.

'Twas Spring's eve in Midgard upon their return,
The time Odin's who-men loved best.
Through the chill of the night they danced in the dark,
And made rude equinoctial fest.

The Jack spied his tail across the dim clearing,
Hung up in an old alder tree.
He yearned for it back with a tear at his eye,
So reluctantly set the grak free.

The men were full-smote by the fire nymph's beauty.
They cheered and they cried as she danced.
The Jack fetched his brush from the night-shadowed tree,
Whilst the hunters were thusly entranced.

“By undying Odin,” he heard them so swear,
“We shall cleave to this rite ever-long.
A fire to kindle all 'pon the Spring's eve,
And voices all raised up in song!”

(The Jack took his brush to the Evernight Wood,
To the owl-witch named Strixa-Most-Fair.
He swore her a blood-oath that paled his fur,
And she wyrd-wished a seamless repair.)

By his den the fox mused in the balming dawn air.
Thought long 'pon his venture infernal.
As he licked at a badly-singed paw he gazed up
At the three-quarter moon waxing vernal.

Had he succeeded, or thus had he failed?
He puzzled with brow all a-frown.
As he slunk to his cave he howled
“Am I the Hero, or am I the head-muddled Clown?”

So good folk, as you sit at the equinox fire,
Whilst this story I gladly regale,
Spare a thought for the Trickster who brought the first flame.
For the fox with the fiery tail.
Posted by Russell Mark Olson at 17:30