My old friend, the Devil

Hello all!
First off, let me say congratulations to the three worthies who managed to solve last week's
Rhyme Royal Riddle, namely Cameron Fulke, Dave Tipper, and Mark Z. I was gonna pick one name out of the hat, but hey, you're all winners to me, so you'll each receive an Annals of Old Moon badge!
They're currently being crafted by my badgesmith, but as soon as I've got them I'll get in touch for your addresses and send them on their way.
So, me and my lovely lass TP visited one of my most favourite ever places last weekend -
Avebury Henge on the Marlborough Downs in Wiltshire. 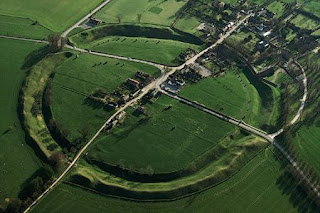 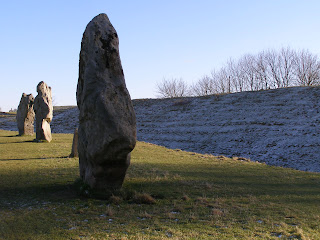 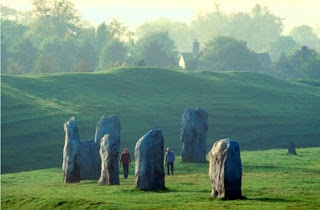 What a place of grand ancientness! If you've never been there, do go one day. It will not disappoint.
Wandering amongst the mighty monoliths (and hugging a few as we went along of course), I got to reminiscing about Adam's Grave, another magnificent ancient site that lies a few miles south.
I first visited it about 12 years ago, and wrote a poem while I was there. Then, almost straight away it seemed, I lost the poem. Bummer. Some years later I tried to re-create it from memory. I was quite pleased with what I came up with, but still mourned the loss of the original. Yesterday, I went hunting for the re-write, and found the one I wrote on that windy barrow! Thank you Universe :) 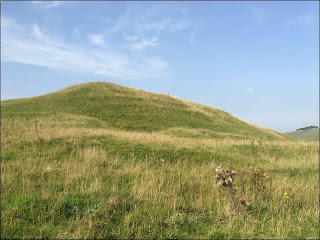 The Devil Came To Adam's Grave

The Devil came to Adam's Grave,
And clip-clopped to the peak.
The wind it whipped his words away
As he drew breath to speak.

So instead, he stirred the embers
That glowed within his middle.
With great black claws, drew out his bow,
And flaming, fiery fiddle.

He warmed his hands with baking breath
To chase away their chill,
Then laid the bow upon the strings,
And started with a will.

The tune he played was very old,
As old as Moon and Sun,
When Earth was still a cooling ball,
And life had just begun.

When snakes and men were brothers,
And danced from dusk 'til dawn,
Munching magick mushrooms
Through many a lazy morn.

At last the bow fell from the strings.
His elegy was done.
With eyes that brimmed with boiling tears,
He blinked up at the sun.

Then, sitting 'pon the grassy tomb,
He chatted to his friend
Of things with wings and golden eyes,
Of paths without an end.

Presently he rose again,
And, checking none about,
He filled his lungs and shook the clouds
With a granite-rending shout
That was partly sob and partly laugh,
And partly fond farewell.
Then finally he hung his head,
And contemplated Hell.

"Well old friend,” he whispered,
“I've really got to go.
It's just too bloody cold up here.
I'm back off down below.”


Next week, a nightmare of the old world will be lurching up from the depths of the Word-Hoard.
She can't wait to meet you...


All images copyright their respective owners

Love this Poem P!! It has been far too long since I've been to Avebury, and I keep promising to show it to Neil - I must go soon!! x

Thanks D :)
Yeah, what a place! We had a lovely day, and the weather was gorgeous too.
Glad u like the poem. As I said, next week will be one that we're really excited about posting. It's a dark one... x