The Song Of The Djembe 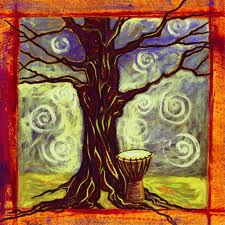 Me and TP went to a lovely party in the New Forest at the weekend (thanks again Jeff & Stef!), and as often happens when there's drumming around the campfire, I recited The Song Of The Djembe, an old poem of mine. Here it is.

The Song Of The Djembe

A gentle young drummer, a master of djembe,
Decided to seek the Mokele M'bembe,
A deep jungle beast of great wisdom and power,
That delights in the nectar of one single flower.

He was after some answers to planet-sized questions,
And any additional tips or suggestions
That might issue forth from a being of power,
Who delights in the nectar of one single flower.

Ah yes, the flower; the key to it all.
A slim fluting trumpet, magenta and small.

There was one thing however that set it apart,
This blossom that dwelt in the jungle's dark heart;
That cherished delight of Mokele M'bembe,
Would only give bloom to the Song of the Djembe.

He knew all the theories, the stories, and more;
The creature he sought was a small dinosaur.
He was most keen to witness a dinosaur drink
From a delicate flower. It tickled his thinking.

And as for the flower, he knew what he knew.
He knew what it looked like. He knew where it grew.
So he rolled back his shoulders, and loosened his mouth.
He hefted his djembe, and he headed off south.

After many weeks journey he came to the place.
A dim jungle clearing. A magical space.
He sat down with his djembe and tightened its ropes.
Gave breath to his palms as he gathered his hopes.

He knew all the rhythms, many since birth.
(His mother had drummed as he grew in her girth)
He drummed out the Makru, the Coo Coo, the Casa,
Then a summoning rhythm he'd learned in Kinshasa,
That rang like a bell through the ebony gloom,
And boomed deep and down to the Mother Earth's womb.

Okapi and rhino, gorillas and birds,
All gathered to hear the drum's summoning words.

And down in the Womb, the great tribe Kontombili,
Those tiny old men who are there but not really,
They weighed up his call with a casual measure,
(They never are summoned – they come at their pleasure)
Then rose up from the earth, oh yes, even they,
And circled to hear what his djembe did say.

From a fruit-laden thicket came huge russet hogs.
Snakes poured forth lissome and smooth from their logs.

And there in the midst of the great forest tribes,
In front of the drummer, his drum and its vibes,
The flower emerged, and the serried horde saw,
And on seeing they shook with a wonder and awe
That soon became fear, for the Song of the Djembe
Would entice the approach of Mokele M'bembe.

A large mossy creature with long golden teeth,
Strode up to the man with enraged disbelief.
“Desist in your rhythm sir! Play it no more!”
Then a mighty sound shuddered the dark forest floor.

Like smoke on the breeze the tribes melted away,
And alone in the clearing, the man ceased to play.
He bit down on his fear, but he couldn't quite swallow,
As the silence stretched taut in that dark jungle hollow.

And then it arrived.
The Mokele M'bembe,
And it took in the flower, the man and his djembe.

As our fellow gazed back, all those planet-sized questions,
And any additional tips or suggestions
That might issue forth from a being of power
That delights in the nectar of one single flower,
They all dropped from from his mind, and he sat there quite dumb.
So he did what came natural, and beat on his drum.

He's still there to this day, that man and his djembe,
And delights to the dance of Mokele M'bembe. 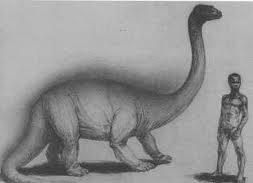 All images copyright their respective owners