Please click on the first image to enlarge the pages.  A full text version of the poem can be found at the bottom of the page. 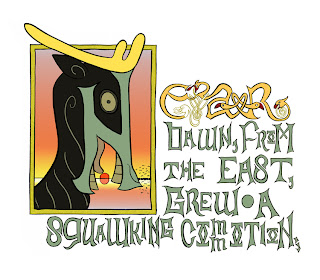 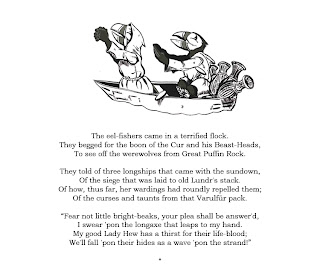 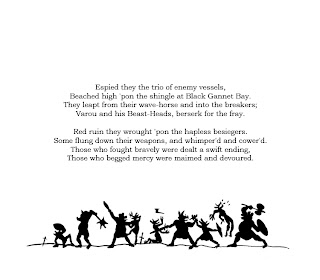 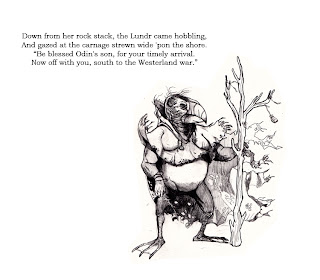 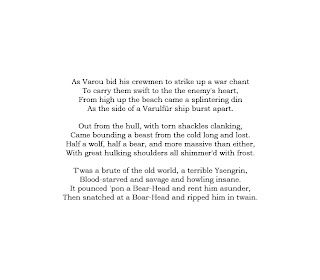 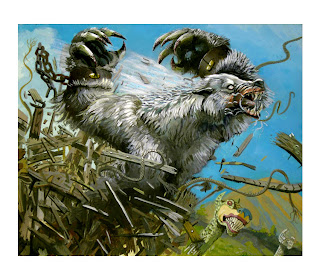 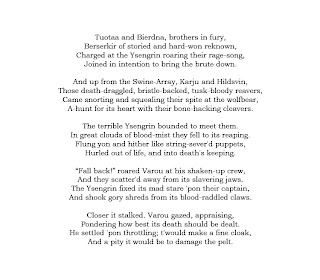 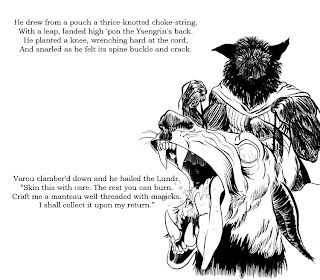 Near dawn, from the east, grew a squawking commotion;
The eel-fishers came in a terrified flock.
They begged for the boon of the Cur and his Beast-Heads,
To see off the werewolves from Great Puffin Rock.

They told of three longships that came with the sundown,
Of the siege that was laid to old Lundr's stack.
Of how, thus far, her wardings had roundly repelled them;
Of the curses and taunts from that Varulfür pack.

“Fear not little bright-beaks, your plea shall be answer'd,
I swear 'pon the longaxe that leaps to my hand.
My good Lady Hew has a thirst for their life-blood;
We'll fall 'pon their hides as a wave 'pon the strand!”

*
Espied they the trio of enemy vessels,
Beached high 'pon the shingle at Black Gannet Bay.
They leapt from their wave-horse and into the breakers;
Varou and his Beast-Heads, berserk for the fray.

Red ruin they wrought 'pon the hapless besiegers.
Some flung down their weapons, and whimper'd and cower'd.
Those who fought bravely were dealt a swift ending,
Those who begged mercy were maimed and devoured.

Down from her rock stack, the Lundr came hobbling,
And gazed at the carnage strewn wide 'pon the shore.
“Be blessed Odin's son, for your timely arrival.
Now off with you, south to the Westerland war.”

As Varou bid his crewmen to strike up a war chant
To carry them swift to the the enemy's heart,
From high up the beach came a splintering din
As the side of a Varulfür ship burst apart.

Out from the hull, with torn shackles clanking,
Came bounding a beast from the cold long and lost.
Half a wolf, half a bear, and more massive than either,
With great hulking shoulders all shimmer'd with frost.

T'was a brute of the old world, a terrible Ysengrin,
Blood-starved and savage and howling insane.
It pounced 'pon a Bear-Head and rent him asunder,
Then snatched at a Boar-Head and ripped him in twain.

Tuotaa and Bierdna, brothers in fury,
Berserkir of storied and hard-won reknown,
Charged at the Ysengrin roaring their rage-song,
Joined in intention to bring the brute down.

The terrible Ysengrin bounded to meet them.
In great clouds of blood-mist they fell to its reaping.
Flung yon and hither like string-sever'd puppets,
Hurled out of life, and into death's keeping.

“Fall back!” roared Varou at his shaken-up crew,
And they scatter'd away from its slavering jaws.
The Ysengrin fixed its mad stare 'pon their captain,
And shook gory shreds from its blood-raddled claws.

Closer it stalked. Varou gazed, appraising,
Pondering how best its death should be dealt.
He settled 'pon throttling; t'would make a fine cloak,
And a pity it would be to damage the pelt.

He drew from a pouch a thrice-knotted choke-string.
With a leap, landed high 'pon the Ysengrin's back.
He planted a knee, wrenching hard at the cord,
And snarled as he felt its spine buckle and crack.

Varou clamber'd down and he hailed the Lundr.
“Skin this with care. The rest you can burn.
Craft me a manteau well-threaded with magicks.
I shall collect it upon my return.”

Posted by Russell Mark Olson at 18:17

Great poem (love the Varou saga!) I also think the pic of the "brute from the old world" is particularly yummy.

Thank ye, kindly. He was fun to paint.