As this glorious Autumn unfolds, and winter approaches, an old poem of mine for you, written at the season's turn, and inspired by my green-fingered friend Isabel.  And by the Faeries too of course.
The beautiful illustrations are by Christina Denyer.

A gardener she, a worker with soil.
In the beds and the bowers each day she would toil.
She lived by the stream at the garden's extent:
A shovel, a hole and a small canvas tent.
The stream was her confidant, friend and confessor.
It never spoke falsehoods or tried to impress her.
Through the garden it snaked, with a skin of bright jewels,
And lingered and swirled in meanders and pools. 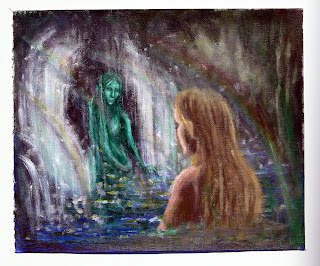 Each morning she swam there, and spoke with its deva;
A lily-green naiad, the Waterweed-Weaver.
Some morns she would bid that the gardener follow,
To the rainbow-spray cave of her waterfall hollow,
And bestow there upon her some spell-word or charm,
That perhaps might protect her from nettle-sting harm.
Or else imbue her with the fineness of vision,
To grant on a leaf with a green-thumbed precision.
She would thank the green nymph with her belly and heart,
Then swim back to the camp for the day's early start. 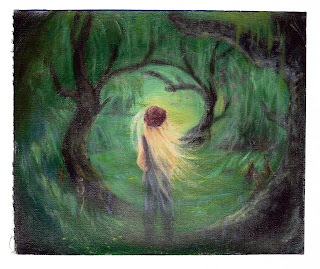 Then, after a breakfast of wind-fallen plums,
She would stand facing North, hook her belt with her thumbs,
And call out her song to the beds and the borders,
To request of the gnomes the day's gardening orders. 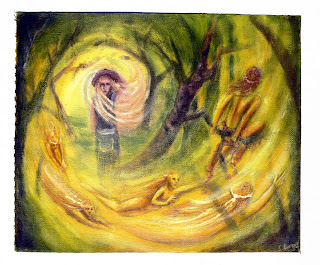 She would turn to the East, with the breeze in her hair,
And cry out her praise to the sylphs of the air,
To give thanks for the leaf devil, zephyr and squall,
That tugs at dead branches, and laughs as they fall. 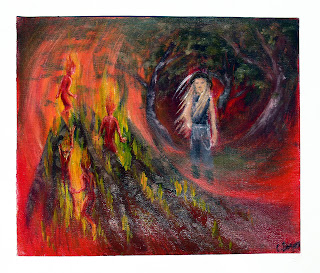 Then turn South, so facing her ash-mantled pyre,
And petition the flame-footed imps of the fire,
To kindle the clippings, the logs and the leaves,
And waft their sweet smoke to her clearings green eaves. 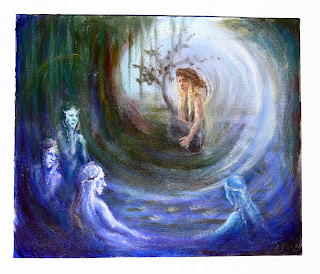 And at last to the West, to the nymphs of the water,
And ask them that she, their grime-nailed daughter,
Might quench of her thirst, and join them at play,
In the stream by her tent at the set of the day. 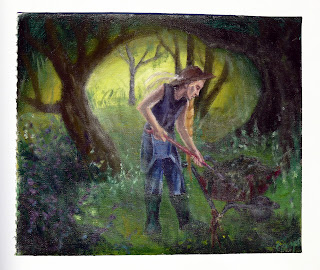 So to work. To the forking and turning.
To the pruning and tending and grass-cutting burning.
With the gnomes gentle prompting judiciously weeding,
And a song for the deadheads, absorbed in their seeding.

At times she would pause with her knees in the loam,
And laugh at the jests of the tiny brown gnome,
Who always was with her throughout the day's toil,
And at dusk would dissolve back down into the soil. 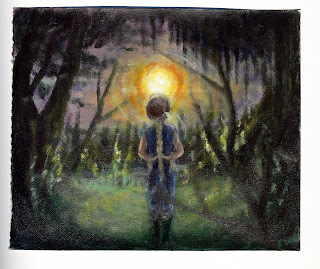 With her fists to her spine, and the day's work all done,
She would stretch back and smile at the westering sun.
On her way back to camp she would stop by the Mound,
That hot-bellied heap on the patch of rough ground.
She would pause and be still, and her ear would just catch
The sounds of digestion within its dark thatch. 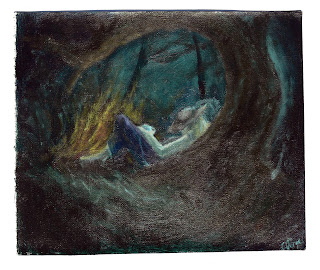 'Neath starlight,at fireside cooking her food,
She would lie back and drift in a mystical mood,
Contemplating the Oneness, the Isness, the Now,
With the cool evening dew forming beads on her brow.
She would lie, if a cool night, up close to her pyre,
And drift off to dreams that were warmed by the fire.

I can hear you reading that in my head, it's lovely (the poem and hearing your voice)
I didnt know until recently that if you are facing the sun you looking due South! I say this becuase I love the clever way you have weaved in the four elements to your poem.