A text version of the poem can be found below the illustrated pages. 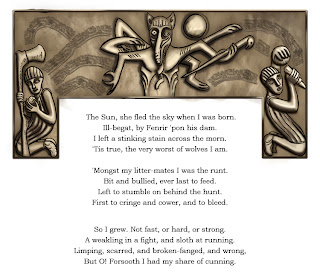 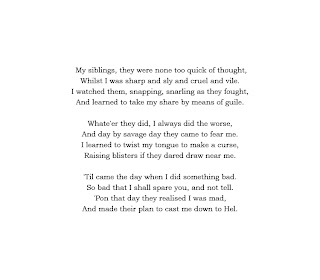 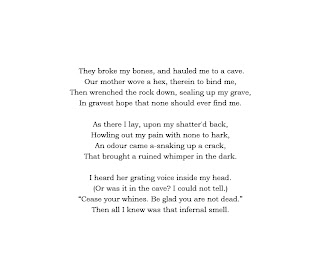 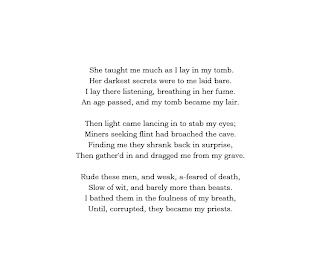 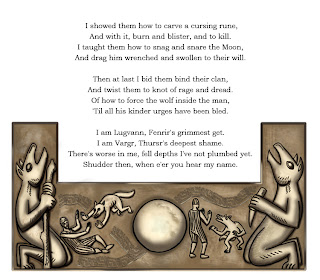 Vargr
The Sun, she fled the sky when I was born.
Ill-begat, by Fenrir 'pon his dam.
I left a stinking stain across the morn.
'Tis true, the very worst of wolves I am.
'Mongst my litter-mates I was the runt.
Bit and bullied, ever last to feed.
Left to stumble on behind the hunt.
First to cringe and cower, and to bleed.

So I grew. Not fast, or hard, or strong.
A weakling in a fight, and sloth at running.
Limping, scarred, and broken-fanged, and wrong,
But O! Forsooth I had my share of cunning.
My siblings, they were none too quick of thought,
Whilst I was sharp and sly and cruel and vile.
I watched them, snapping, snarling as they fought,
And learned to take my share by means of guile.
Whate'er they did, I always did the worse,
And day by savage day they came to fear me.
I learned to twist my tongue to make a curse,
Raising blisters if they dared draw near me.
'Til came the day when I did something bad.
So bad that I shall spare you, and not tell.
'Pon that day they realised I was mad,
And made their plan to cast me down to Hel.
They broke my bones, and hauled me to a cave.
Our mother wove a hex, therein to bind me,
Then wrenched the rock down, sealing up my grave,
In gravest hope that none should ever find me.
As there I lay, upon my shatter'd back,
Howling out my pain with none to hark,
An odour came a-snaking up a crack,
That brought a ruined whimper in the dark.
I heard her grating voice inside my head.
(Or was it in the cave? I could not tell.)
“Cease your whines. Be glad you are not dead.”
Then all I knew was that infernal smell.
She taught me much as I lay in my tomb.
Her darkest secrets were to me laid bare.
I lay there listening, breathing in her fume.
An age passed, and my tomb became my lair.
Then light came lancing in to stab my eyes;
Miners seeking flint had broached the cave.
Finding me they shrank back in surprise,
Then gather'd in and dragged me from my grave.
Rude these men, and weak, a-feared of death,
Slow of wit, and barely more than beasts.
I bathed them in the foulness of my breath,
Until, corrupted, they became my priests.
I showed them how to carve a cursing rune,
And with it, burn and blister, and to kill.
I taught them how to snag and snare the Moon,
And drag him wrenched and swollen to their will.
Then at last I bid them bind their clan,
And twist them to knot of rage and dread.
Of how to force the wolf inside the man,
'Til all his kinder urges have been bled.
I am Lugvann, Fenrir's grimmest get.
I am Vargr, Thursr's deepest shame.
There's worse in me, fell depths I've not plumbed yet.
Shudder then, when e'er you hear my name.